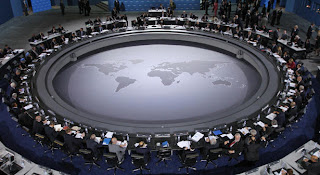 Now, half of it is sitting in storage. The federal government tried unsuccessfully to flog it on its equivalent of eBay then couldn’t even give it away, the Star has learned.

The plywood and laminate Toronto G20 conference table, bought second-hand from the U.S. government for $97,000, didn’t get a single bid when the federal government listed it on the Crown Assets Distribution online auction site.

Unable to unload the massive circular table, which seats up to 66 at the outer ring, the federal government offered it to the town of Huntsville.

But while Huntsville found a home at its new University of Waterloo campus for the three dozen desks that comprised the outer ring of the table, it didn’t want the inner ring where the leaders like Prime Minister Stephen Harper and U.S President Barack Obama sat.

“The table is a piece of junk,” explained John Finley, economic development officer for the town of Huntsville. “It’s particle board.”

It’s also massive. So massive, the government wasn’t quite sure what to do with it.

“Within government, there is no demand for a table consisting of two concentric rings and 16.5 m in diameter,” explained Béatrice Fénelon, spokeswoman for Foreign Affairs.

“The size of the room required to accommodate such a table suggests little or no interest in acquiring it. Transporting the table requires two 16 metre trailers. Over time, storage costs would become prohibitive.”

However, the inner circle of the summit table is now in storage in Ottawa and will be re-utilized for future events and international conferences, she said.

The table wasn’t the only item donated to Huntsville, located in the Parry Sound-Muskoka riding represented in Ottawa by Industry Minister Tony Clement.

Barely used transformers and electrical panels, bought to ensure emergency backup power for the summit, didn’t get any bids either when they were put up for sale on the Crown Assets site. They were then donated to the town of Huntsville.

Planks from the deck of the Experience Canada water feature, dubbed the Fake Lake, as well as two canoes from the First Ladies cultural events were donated to children’s camps in Muskoka while the Living Wall was given to the Direct Energy Centre.

Finley said he agreed to take the transformers and electrical panels even though he wasn’t quite sure what to do with them.

“Nobody bid on them,” Finley said when asked their worth. “They’re not worth shipping back to Ottawa.”

A few have already been used in municipal building projects while others are in a warehouse and could be donated to other towns in the area.

“We may be having to use them for boat anchors at some point,” he joked.

The table was made for the G-20 summit in Pittsburgh in 2009 by Maryland-based Hargrove Inc. which has worked on a number of summits and large events held in the U.S. Short of time to organize the Toronto summit, the Canadian government decided the quickest solution was to simply buy the previous summit table from the Americans.

The cost of the $97,000 table is included in the $857 million price tag for the G8 and G20 summits. However, the table itself was “inadvertently” left off the itemized list of expenditures made public, said one official.

While the G20 table was costly, the government saved money on the table used for the G8 summit in Huntsville by reusing the same table it used for the G8 meeting in Kananaskis in 2002 and the North American Leaders Summit in Montebello in 2007, said Fénelon.

They also reused tables, flags, desks, computers and chairs used for Montebello and a Francophonie meeting.

Fénelon said they also tried to control costs by renting equipment in many cases. Other things bought for the summits are still in use. For example, some of the computers are now being used by government officials for meetings.

NDP MP Pat Martin, a former carpenter, said the government paid far more than it should have for the G20 table.

“They paid through the nose for the table to begin with. You can go to a custom millwork shop and get the most fabulous millwork in the world for that kind of money. It’s a staggering amount of money for a single unit of plywood millwork.”

The government should have made more effort to recover the “outrageous” amount it paid for the table, he added.

“It’s a drop in the bucket in the global spending but it’s a staggering amount of money to the average taxpayer.”

“When you look at the price of these things it does seem completely out of line. It’s just amazing to me. I think a lot of the financial implications of this have not been fully understood by the government as it goes forward.”

Here, I see a design opportunity. Not only the table itself, but also the government system.

Im not such a political person, but as a tax-payer of the city, as a designer, I do not want to see my money being wasted on objects and systems that are considered "junk".