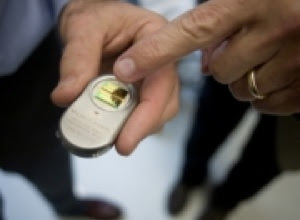 The concept of a microchip that would deliver drugs when implanted into the human body was created by two MIT professors, Michael Cima and Robert Langer 15 years ago. It has recently passed human trails where the device was implanted into 8 women and delivered a drug for osteoporosis once a day for 20 consecutive days. This method of delivery proved to be just as effective as   injections of the drug.

The microchip can controlled wirelessly to delivery on the drug on demand or programmable to release the drug in intervals. It is implanted in the patient during a 30 minute procedure at the doctors' office under local anesthesia and can remain in the patient for up to 4 months. The chip is 5 cm long and 3 cm wide and contains 20 depositories, each holds 600-nanoliters of drug solution. They are currently working on a version that could carry more doses and a sensor could be combined with the chip so that drug treatments could be adapted according to patients glucose levels and condition. This safe and painless way of administering drugs could open doors to treat other diseases.